For a current IPS/IDS project I was looking for a test system to benchmark various IDS/IPS engines. The idea was to record network captures carrying malware samples in HTTP, SMTP or other protocols, and replaying them against the various detection engines. Problem with that is that tools like tcpreplay, bittwist or Ostinato all replay the trace on a single network card, which means that both “client” and “server” side of the communication are injected into the same NIC of the detection engine.
END_OF_DOCUMENT_TOKEN_TO_BE_REPLACED

It’s been a while…

…before I found some time to post something on this blog. Mostly because of the summer break, but also because I was attending DefCon 2013 in Las Vegas, after a break of 3 years. I used to be at DefCon every year while it was held at the Riviera, working for the hotel as a network security expert (“We need protection! Evil hackers everywhere!”) with my buddies Eddi and Landi. Funniest thing the Riv guys did back then was to disconnect all public network ports accessible to the public (“the hackers”) like we told them too – well, all except one. That one, they put a small padlock in front of it. Our question to them was “uhm… did you know they have lock picking contests? What do you think will happen when they see this?” 😉
END_OF_DOCUMENT_TOKEN_TO_BE_REPLACED

15 years ago, Wireshark was “born”, so happy birthday!

Take a look at the official Wireshark Blog for Gerald’s post. And watch Gerald’s keynote he did at Sharkfest 2013. And, of course, the funny video about how it was all Karen’s idea – which Gerald, at the time it was shown at Sharkfest, had no idea about (the video, I mean) 🙂
END_OF_DOCUMENT_TOKEN_TO_BE_REPLACED 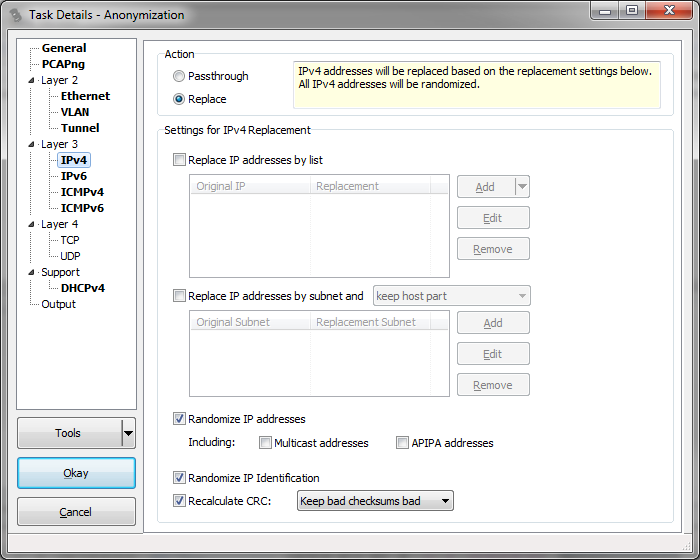 Trace file anonymization, trace file sanitization… it seems like I can’t decide whether to call it “Sanitization” or “Anonymization” – even in my code base it is sometimes called the first, sometimes the latter. Of course there is a small difference between the two – one is removing sensitive data by cutting it away, while the other replaces it with something generic.
END_OF_DOCUMENT_TOKEN_TO_BE_REPLACED

Yesterday I returned from the annual Wireshark conference, Sharkfest 2013, and once again it has been a great conference. I had four talks (well, actually I had three, but one was scheduled to run twice and it looks like I never do a talk the same way), and one of them I did together with my coworker, Christian.
END_OF_DOCUMENT_TOKEN_TO_BE_REPLACED

Today, while doing a lot of testing of my trace handling code as well as in preparation for the upcoming Sharkfest 2013, I got a trace sample from Landi that he wanted me to take a look at because he wondered about some SSL decoding stuff. So I did, and while we were talking about what the SSL dissector was doing I saw a new TCP expert message I had never seen before: “TCP Spurious Retransmission”.
END_OF_DOCUMENT_TOKEN_TO_BE_REPLACED

Today I was using a combination of dumpcap and Wireshark to run a network forensics investigation against a server that may have been compromised. A couple of malicious files had been reported by the virus scanner, so I had to take a closer look at what it was doing in the network. Actually, dumpcap was already running for a couple of days in front of the firewall using a capture filter set to the server IP, recording everything that the server sent or received to and from the internet. So basically I wanted to separate good from bad traffic, if any, and see what was transferred.
END_OF_DOCUMENT_TOKEN_TO_BE_REPLACED

END_OF_DOCUMENT_TOKEN_TO_BE_REPLACED

One of the many features Wireshark provides is the name resolution for various protocol layers, and I have to admit that – at least for me – some of them are really helpful while others (well, one of them, to be more specific) annoy the hell out of me. I really like MAC layer resolution, and often I enable network layer name resolution, but I really do not like protocol name resolution. Oh, and then there is GeoIP resolution, which is really helpful in some cases as well, but it takes a little time to set it up.

One of the questions that I often got in my network analysis classes was how to capture damaged frames. It is an obvious thing to ask, since frames with bad checksums will most certainly have to be retransmitted or are at least a nice indicator that something went wrong while transporting the frame.
END_OF_DOCUMENT_TOKEN_TO_BE_REPLACED