The trouble is: there are some problems where it’s not easy to capture packets, and that’s when you don’t know the correct capture location (usually meaning “there’s too many possible locations”) or the exact time for the packets with the symptoms to be recorded – or both.

When a customer tells me “well, whenever I do this, the problems shows up”, I know that it won’t take long to diagnose the network. If the problem can be reproduced you can easily capture packets, simply because you know where to capture (at the persons PC/Mac/whatever it is) and when (while the person is doing whatever causes the problem). Those “easy” problems are the reason why most experienced analysts I know always carry a portable switch with a static or configurable SPAN port feature or a TAP in their laptop bags at all times. BTW, “hubbing out” by using a network Hub instead is an ancient technique and should be avoided at all costs (except in very special situations where the medium is still half duplex).

A word of warning to those still carrying Ethernet hubs: if I find out about you doing that in switched production networks, I’ll most likely make fun of you in my talks at the next Sharkfest! 🙂

If you have an intermittent problem the first thing to decide is where and how to capture packets. This decision is mostly based on what kind and number of capture devices you have, and what the network topology requires. In most cases the capture setup is a balancing act between choosing enough spots to have a high probability of capturing relevant packets and the number of capture devices you can deploy.

Some capture situations allow you to use SPAN ports, but in other cases you have to use TAPs, for example:

The most complicated capture setup I ever designed in an enterprise level network analysis situation took about two weeks just to decide which devices to use in which location (I’ve mentioned this one in the first of the VMware capture posts already). It involved a huge virtual server cluster environment running DRS on fully automatic, with hundreds of ESXi servers. Plus there were quite a few network analysis nightmares like reverse proxies, forward proxies, load balancers and NAT gateways. A lot of the communication was SSL encrypted, and of course we had no access to the private keys. It doesn’t get more complicated than that (and we still helped the customer solve the problem).

One thing is pretty much always the same in situations like this: you’ll end up digging through tons of capture files with millions of packets. The biggest job my team ever analyzed had close to one TByte of capture files, in thousands of files. Now, how to analyze something like that? One thing is certain: you can’t look at all those packets in Wireshark, unless you visit the groundhog each day in the morning. You need to drastically reduce the amount of packets you’re going to examine first.

Reducing the number of packets to look at

The best way to minimize the amount of packets to look at you should have as many additional information about the problem occurring as you can, including

Now, if you have access to commercial tools that are able to handle large file sets you can use those the help you digging through your captures, but that’s not always an option. Instead the relevant packets are often carved from the huge pile by leveraging tshark and mergecap scripts with read filters, e.g with a batch file containing something like

First, tshark is used to read all files, then apply a display filter (working like a “read filter” in this case), and write the result to a new file. Afterwards, all the new files are merged together into one more or less big file (in Windows batch mode you need %%a, while on the command line you’d use just %a). The second step may be skipped or modified if the file gets to big to be opened in Wireshark, but it often helps to have as much details in a single file as you can. Keep in mind that the 64 bit version of Wireshark can open larger files than the 32 bit version.

A new way of dealing with a large set of capture files is to use TraceWrangler. Right now most people knowing this utility think of it as a anonymization/sanitization tool, which is correct – but that’s not all it is supposed to do. Sanitization is only one of the things it can do, but the main focus of TraceWrangler is to help working with multiple files. So if you have a big pile of capture files you could add them to TraceWrangler (you may need the 64 bit version and a few GByte of RAM if you have a lot of packets) and have it scan them: 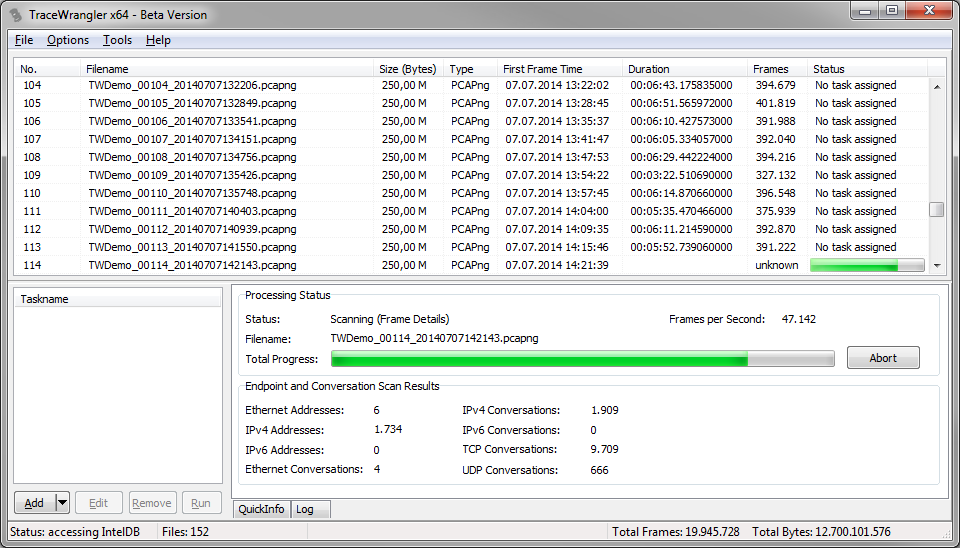 Now, open the “Communication Details” window via the “Tools” menu and you’ll get a endpoint and conversation statistic much like the one in Wireshark – but calculated over all files currently added to the file list, like in the following example (1.6 million TCP conversations, calculated over a total of 152 files of about 38GBytes with 59 million frames):

There are two additional columns in the TCP statistic window that you do not (yet?) see in Wireshark:

When you find something interesting, you can always use the popup menu to either copy a Wireshark display filter string to the clipboard and apply it in Wireshark, or you can extract one or multiple conversations to a new file (e.g. if you want to know why a conversation might have an initial RTT of 90 seconds):

I often leave TraceWrangler open and copy filters over to Wireshark, which is more convenient than picking filters from statistics windows of the same Wireshark instance.

Let’s assume we want to know why a conversation would need 90 seconds for the initial handshake. The easiest way to do that is to mark the TCP conversation and hit “Extract to -> single file”. After extracting the conversation to a new file it’s time to look at the packets in Wireshark:

Those 12 packets were easily extracted from a huge pile (close to 60 million) with a few mouse clicks. Of course it doesn’t always work as simple as that, but if you have some additional details like I mentioned in the bullet list above you can extract a lot without having to read tons of packets. It’s a good example of a very problematic session, where the client obviously suffers from heavy packet loss (the capture was taken right in front of the server).

Now for a small challenge: can you tell why TraceWrangler diagnosed a iRTT of 90 seconds from the screenshot above? And is that number correct, or do you think iRTT should be a different value (Wireshark 1.12.2 says iRTT is 6.122721 seconds)? Write a comment 😉