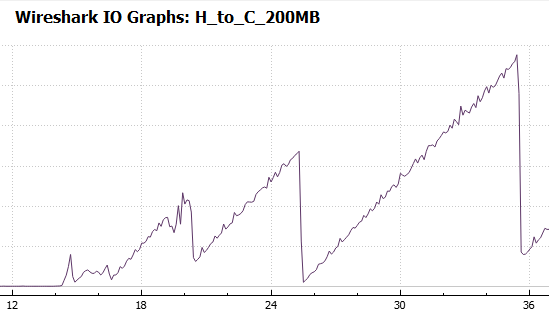 First Trace – Writing to the Filer

The file being analyzed is C_to_H_200MB.pcap. We find one really interesting TCP connection on source port 63726. The RTT from the 3-way-handshake is 23 msec. The client side shows a TTL of 128, the server side shows a TTL of 55. So we can assume, that the trace shows the client view of things.

When analyzing slow SMB or SMB2 connections it is often advisable to investigate transactions that occur often or cause a long total time, as specified in the column Sum SRT: 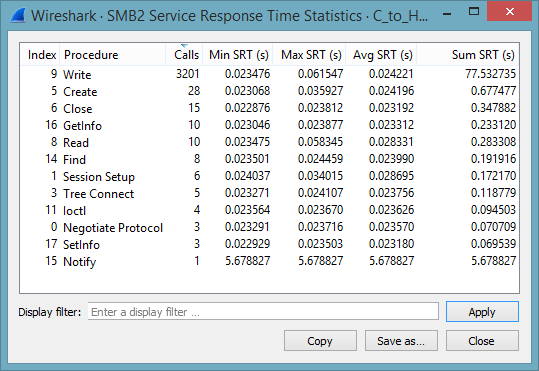 At the first glance this is rather odd, as TCP usually increases the transmission rate in a logarithmic way. We will discuss this little fact at the very end of this post. 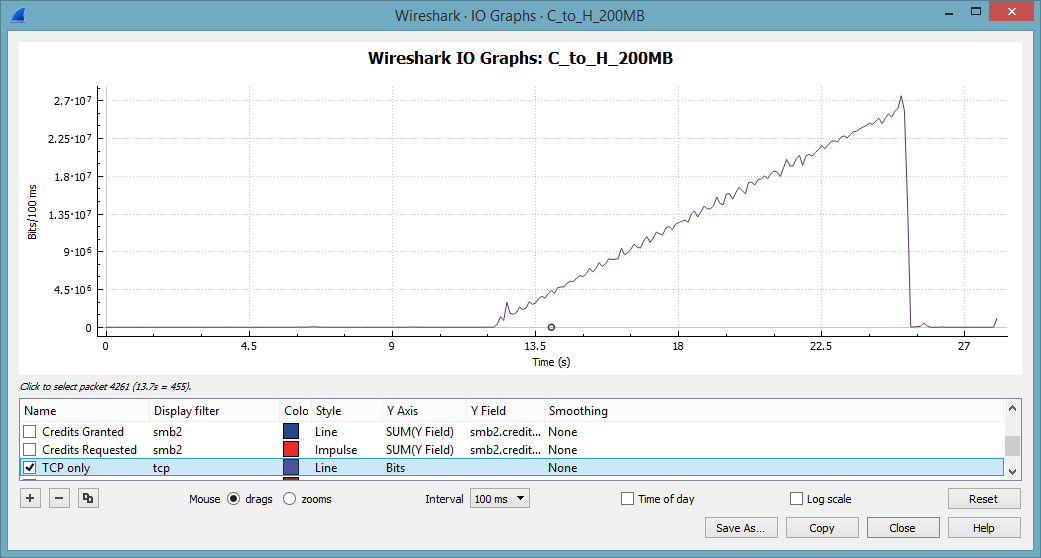 I/O Graph at sender side

This file is H_to_C_200MB.pcap. The interesting part is one large TCP connection with the source port 63753. Again, we find a RTT of 23 msec. The service response time shows a maximum SRT of 2.5 seconds for read operations. This is clearly a very long time. 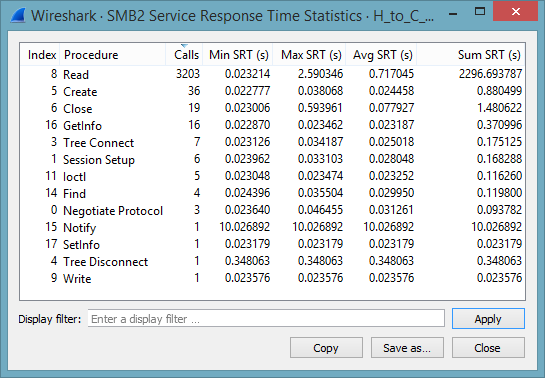 SMB2 uses a concept of credits. Clients receive a number of credits when the session starts. Each I/O will cost a number of credits, depending on the I/O size. The server will grant credits with the response code. One credit will allow up to 64 kByte. Larger request sizes cost more. As long as the client has sufficient credits he can pipeline multiple requests. If the server is experiencing a heavy load, credits will be replenished slowly or not at all. Luckily we can visualize the use of credits with Wireshark’s wonderful IO Graph: 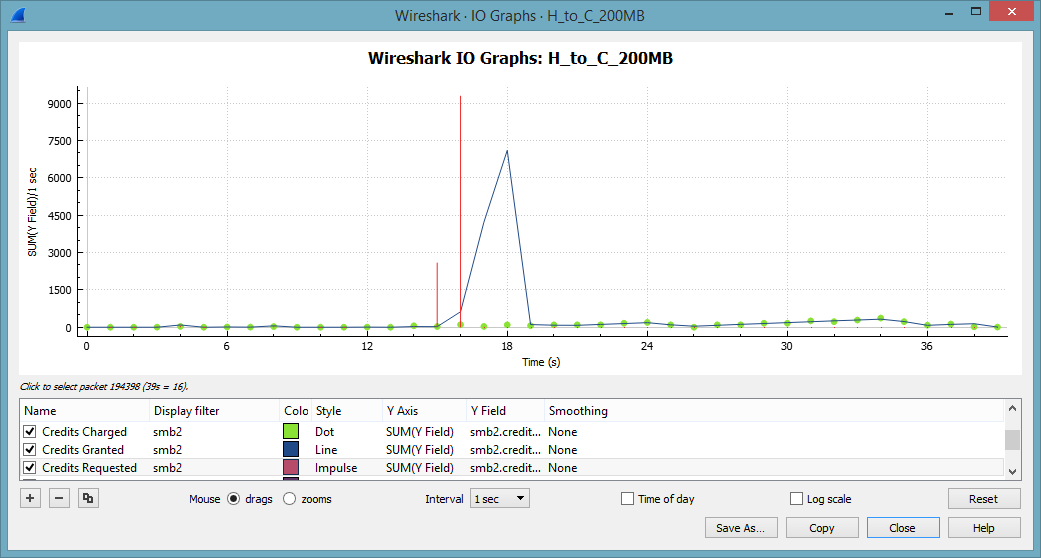 I/O Graph at receiver side

15 seconds into the trace file the client starts requesting credits like mad. These requests are granted a few seconds later. As the server is still granting a healthy dose of credits we can eliminate an overloaded server for the time being.

Way more interesting is the TCP throughput. This tell-tale pattern becomes clearly visible if we set the interval for the Y-Axis to 100 msec: 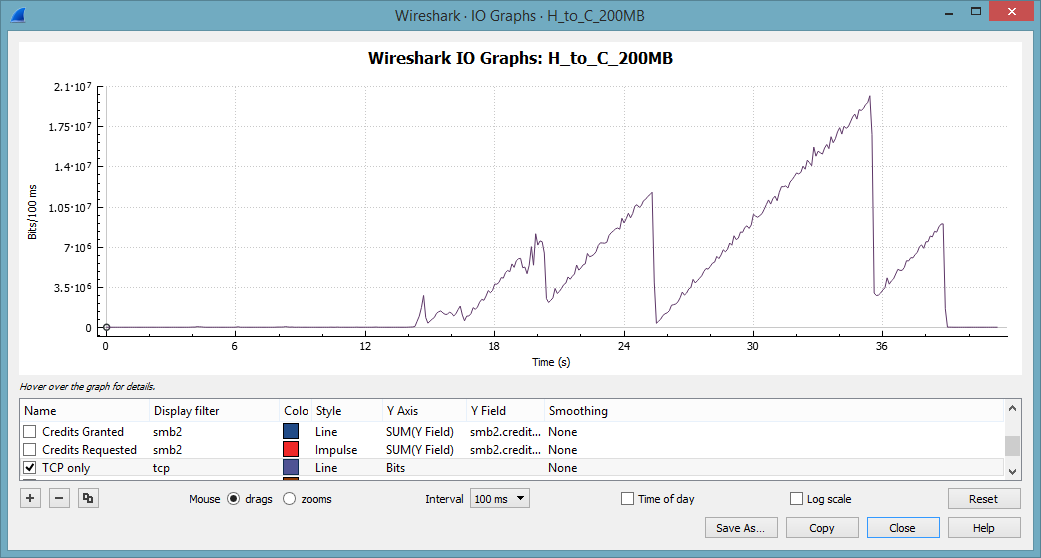 SMB2 I/O Graph at receiver side

This saw-tooth pattern is a text book example of multiple TCP slow starts. Note that we never reach the same throughput as with the write operation. Wireshark makes it easy to spot retransmissions and lost packets. Unfortunately, we don’t have many of these. Instead the TCP expert delivers a number of interesting and rather odd expert messages:

Most remarkably we have overlapping data. This is worth investigating. Here is one small section where it happens. Note the (relative) sequence number 488433 in packet 734:

We get the same data again in packet 824. This time the packet sizes are slightly different, as data is sent en block from the buffer:

Our client is dutifully acknowledging data. The server must have missed a rather large number of ACKs to undergo a TCP slow start. This packet loss is definitely not caused by the client side.

The packet loss could be caused by a number of events. Examples are:

The question on ask.wireshark.org tells us that the slow performance is quite common and can be reproduced. As the problem only manifests itself in SMB or SMB2 traffic we eliminate these reasons.

In situations like that it is often useful to locate similar symptoms in various support forums.

The article links to a known bug for the Nexus 7000:
https://quickview.cloudapps.cisco.com/quickview/bug/CSCtg95381

Before pointing the finger at the Nexus it would be advisable to verify, if the conditions given in the bug report are met in this special configuration. We don’t have the information about the server at this time. To locate the real culprit requires an analysis of the whole chain between the Client and the Netapp. Under the given circumstances I would work my way from the server backwards, starting with the link between Nexus and Palo Alto.

Epilogue: The tale of the linear throughput increase

I hope that this rather lengthy post still leaves you with a small receive buffer to discuss the last noteworthy topic from this trace: The TCP throughput graph. You might remember the throughput from the first trace file:

I/O Graph: Taken at Sender side

To explain this behavior we have to remind ourselves that we are not investigating one lengthy data transfer, as in FTP. FTP would send the file en block in one TCP turn. This is SMB2, where the file is requested in chunks of 64 kByte. In other words: The client can control the bandwidth used for the transfer by timing the requests.

The relationship between TCP throughput and SMB2 requests becomes evident when we visualize the number of SMB Requests: 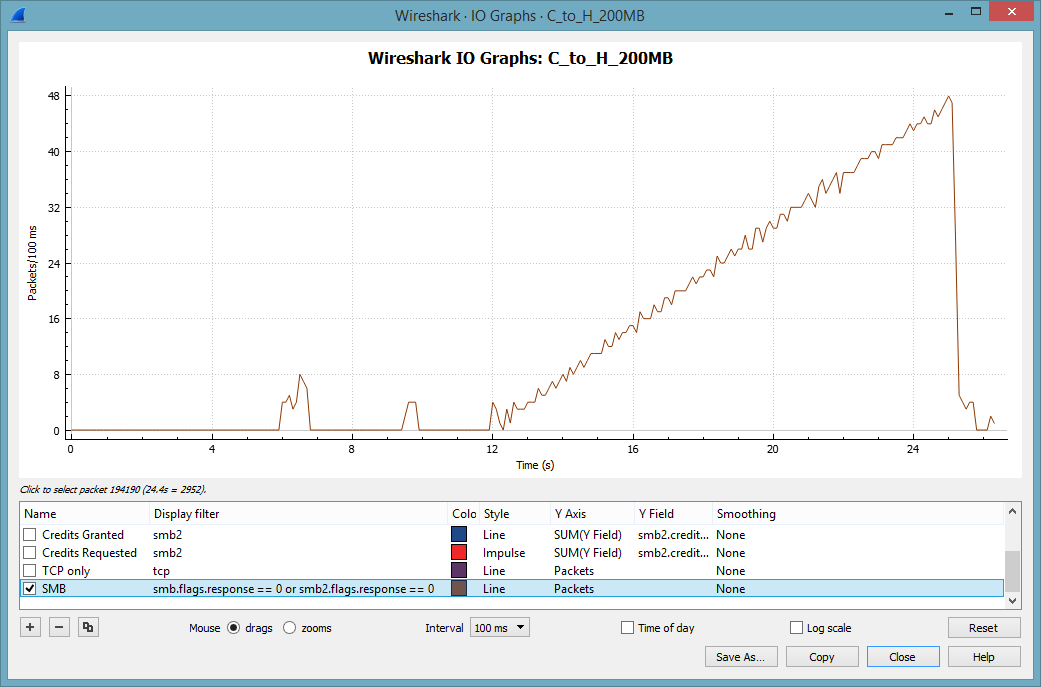