Let’s assume you have a set of capture files taken in front of an internet server infrastructure, e.g. a bunch of virtual servers hosting web pages, email, like this:

In network forensics (or any kind of forensics, or even any kind of analysis) you have questions you need to find answers for. Sometimes it can be difficult to ask the right questions, but that’s something that comes with experience – in the beginning, start with simple things and use the results to ask further questions. So let’s start simple.

In network forensics investigations it is quite common to isolate interesting protocols to take a closer look at what’s happening. SSH is particularly interesting, because it allows remote access to a system, so attackers love to probe ports they can test passwords on (if not configured to allow certificate authentication only). And if they’ve already broken into a system they may use the legitimate SSH port to control it remotely. Looking at the relevant packets may sound like a simple task at first:

Heads-Up #1: Look at the size of that thing!

Loading a capture file is easy when there’s just a few megabytes, but as soon as you get into the range of gigabytes or even terabytes, loading the packets into Wireshark simply won’t work. Often, the capture is spread across multiple files, making it even harder to look at the big picture. In situations like that, the standard way to go is to carve the packets you want to look at via tshark loop and merge them with mergecap afterwards, e.g. like this:

Here’s the transcript for those who don’t want to watch the GIF because they’re impatient, or just because either the font is too small or the colors of my shell (Take Command) are a challenge. And especially for Christian 🙂

First, I create a subdirectory to store the new files in. This has two advantages: I can used the %a variable (containing the current filename) without appending anything, which would be required to avoid overwriting the original if I would try to write to the same directory as the original file. And the directory tells me what I carved from the file set, in case I do multiple runs using different filters.

The tshark parameters I use are:

After that, it’s just mergecap in concatenate mode (“-a”) to create a combined file called ssh_all.pcapng.

As a fast alternative you can do the same with tcpdump/windump for simple things like port and IP filters (although you may not be able to process pcapng files, only pcap). tcpdump uses BPF which is much faster than the display filter engine used in the example above, but it’s not as versatile (meaning: you can easily filter on hundred thousands of fields with display filters, which you often can’t with BPF).

The equivalent to the tshark job above could be this bash script:

Do you know what the difference between the “ssh” filter and the “tcp.port==22” filter is? Most readers probably know that SSH usually runs on TCP port 22, so aren’t both filters identical? Well, let’s find out:

Okay, that looks like it’s ssh traffic. And this is what happens if you filter on “tcp.port==22” instead:

As you can see, there’s a difference: the port filter will show all packets of the TCP conversations on port 22 (including handshake and acknowledgement packets), while the SSH application filter will only show packets containing SSH content.

So choose your filter wisely, depending on what you want to look at – if you only care for SSH content you can use the “ssh” filter. But that will hide failed connection attempts and port scans, which can be of interest in an investigation as well.

One interesting thing when analyzing packet of network applications is to check out the banners they often send at the beginning, because they contain product names and versions. It’s also often a good idea to check for unusual banners that may point to malicious activity. So if we want to check the SSH banners sent by the server it would be perfect if we could filter away all the packets that do not contain a banner.

So let’s do a little exercise if you want. Grab my SSH example file and try to come up with a display filter that shows only packets with banners, like this:

I’ll explain how I filtered for the result above in the next part, but only continue and read it if you’ve done the exercise (or just want to know how it’s done – but the learning effect will be considerably less if you haven’t tried yourself first 😉 )

To build a successful filter for the SSH server banner we need to look at the location where it can be found. It’s the first packet the server sends after the three way handshake. The main problem with that observation is that you cannot filter on packet dependencies directly, meaning that something like “give me the first packet after the three handshake packets have been found” isn’t possible without some tricks.

So here’s my filter (use your mouse to highlight it to read it):

Let’s break it into it’s sub elements and see what they do:

In case of inspecting SSH it is much more interesting to see what SSH client banners we see, because the server banners are coming from devices we have control over – so there should be no surprises (unless someone infiltrated a server and started an SSH service without our knowledge 😉 ). Modifying the filter for the server banners to display client banners instead is pretty simple: just reverse the packet direction you’re looking for.

Lets say the SSH service is used for access for legitimate users strictly connecting from Germany. During an investigation it may be interesting to see if there successful connections from other countries as well in the captured packets, because that could mean someone stole or guessed credentials or SSH client certificates. To check the geolocation of a connection your Wireshark installation needs to have a working GeoIP resolution configured: 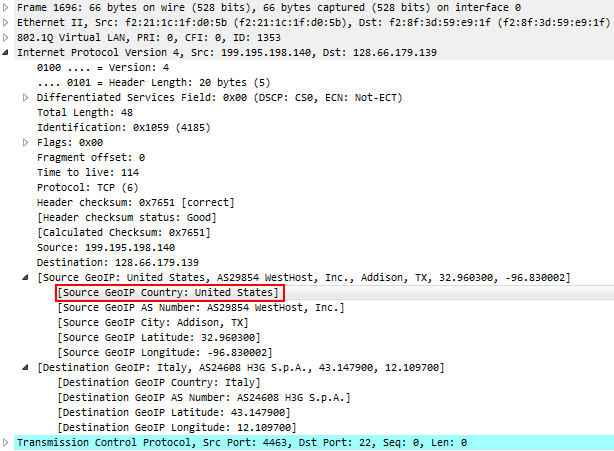 Now, checking source countries per connection by looking at packet decodes is way too much work (unless you’ve got a bored intern that needs something to do 🙂 ), but fortunately there are better ways:

To add the Wireshark custom column, simply find the field you want to add, and use the pop-up menu to apply it as a new column:

While having a source country column is nice, it still means that you have to scroll through all the packet in the file, which isn’t that efficient either. I prefer using tshark, e.g. like this:

Of course this is still a long list, so I use the additional command line tools “sort” and “uniq”  (for Windows I install the UnxUtils from SourceForge), and pipe the tshark output into them (sort first, then reduce to unique entries):

It takes a while depending on the capture file size, but in the end you’ll get a nice list (with a occurrence count by specifying the “-c” parameter for the uniq command. By the way, you can do the same on Windows without the “sort” and “uniq” tools from Sourceforge by using Powershell instead (but without the counter):

Now there are two unusual entries in the list above: “China,Italy” and “Italy,United States” – how can a single packet have two different IP source  countries at once? I challenge you to find out 😉

Network Forensics is about answering questions, mostly “Who did what when where, and why?”. Depending on the task you should leverage different tools, including Wireshark, tshark, mergecap, and others that I didn’t use in this post (e.g. Network Miner). Start asking yourself simple questions first, and dig deeper if you find something that seems odd or interesting.

Update: for those of you who prefer to work with tcpdump there’s a cheat sheet available here as PDF and JPG.