Tracewrangler was always supporting IPv6 from the start (even though without extension headers except fragmentation), but last weekend I realized that I could improve the sanitization feature due to something that is missing compared to IPv4: subnet masks. This may sound funny, but in fact the missing subnet masks help.

Imagine you want to sanitize these two IPv4 addresses found in two packets:

With IPv6, this is not a problem anymore. The prefix is always 64 bit wide, and the interface ID holds the remaining 64 bits. So when I see two IPv6 address with the same 64 bit prefix I can sanitize them and put them in the same new “subnet”, assigning the same replacement prefix. So I thought I do a quick overhaul of the IPv6 sanitization form to allow that kind of easy randomization setting instead of the same mechanism like IPv4: 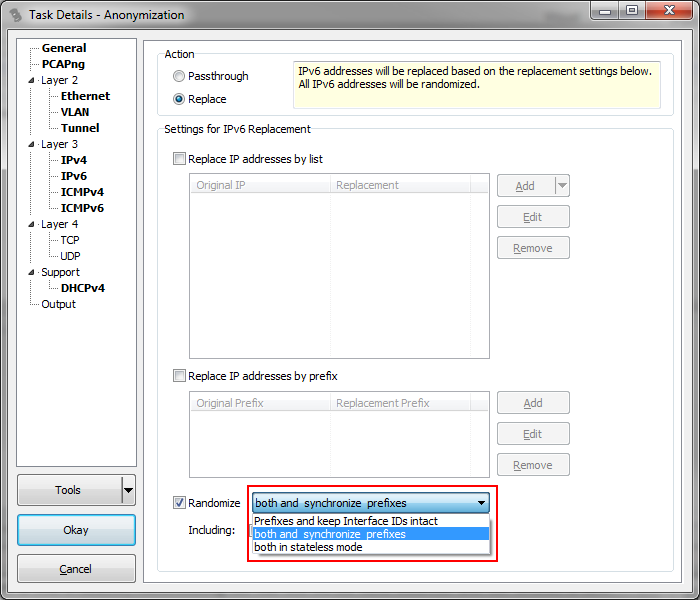 Of course the “full randomization” feature is still available, randomizing the full 128 bit for each address. But the default is now “randomize both and synchronize prefixes”. This means that each new prefix that is found will be replaced with a new, random prefix same as the interface ID (the “host part”). But IPv6 addresses with the same original prefix will end up with the same new prefix, keeping the IPs in the same network automatically. If you want, you can even choose to keep the original interface IDs, if you have no problem with them staying the same (which is not the default because of EUI64 based addresses potentially exposing MACs). Nice.

The trouble started when I started changing the actual sanitization/address replacement logic. I realized that my old code had not worked correctly under all circumstances, so what I thought would be a quick change turned into almost two full weekend nights of code overhauling.

You wonder what’s so complicated about replacing a couple of IPv6 addresses? Well, let’s do a little experiment/challenge (if you like) – take a look at the following IPv6 Neighbor Solicitation packet (kudos to Cloudshark for providing the neat nesting feature for single frames). So, can you sanitize the IPv6 addresses so that the findings stay completely the same compared to the original, when an analyst examines it?

By the way, here’s the file in Cloudshark, in case you want to see more or download it: https://www.cloudshark.org/captures/f4909502e0b9

If you’ve tried (or chose to not bother to), read on, and I’ll lead your through the steps required. There’s a lot more to this than probably meets the eye.

Now, all of those steps are normally performed top down, meaning from ICMPv6 layer down to Ethernet. This is because the lower layers need to know what they’re carrying. Problem is, with sanitization you often need to look at things in other layers, and cannot simply replace values only within the current layer. This is especially true for IPv6, because it has a lot of “interaction” between layer 2 and 3, and even 4 (if I consider ICMP layer 4).

Sanitizing packets is not as easy as it may seem. If you’re just patching some address bytes you’re more often than not going to end up with a capture file that makes no sense anymore, unless you are very thorough. Especially when there are as many dependencies of MAC, IP address  and ICMP as you have with IPv6. You also need to have a database to look up previous replacements, because otherwise you’ll loose the dependencies between multiple frames. Some tools try to avoid this by using hashing algorithms on addresses (which will keep them consistent without the need of a database), but that kind of replacement fails miserably for obvious reasons in cases like the one I just presented.

As for the new TraceWrangler version – I’m still working on it to get it ready for my talks at the FIRST conference and Sharkfest. The current planned release date is the 17th of June, 2015.