My previous post was about one of multiple false positives a network analyst needs to keep an eye out for to avoid writing down findings in a report that weren’t really there. So when I looked at my Sharkfest traces to see what other topic I could write this post about I realized that I have already “burned” two of the other false positives in earlier posts. Well, the good thing is you don’t have to wait and can read about them right away (if you haven’t already).

The two posts I wrote regarding false positves are:

So with three false positives out of the way I realized that there was another that I presented at Sharkfest 2013 that was really nice, but unfortunately isn’t relevant anymore. It was about the TCP expert of Wireshark diagnosing a retransmission by mistake, instead of an out-of-order arrival. But with the work of Evan, Jörg (both Wireshark core developers) and myself we fixed it during Sharkfest 2014, which you can read about in detail here. So it’s four down now, but don’t worry, there are more.

So while I was thinking about which one I was going to write about next, a capture file arrived via mail from Silvia Hagen, the well known Swiss IPv6 evangelist and book author. She had captured it on her PC while working with it, and she had a couple of topics where she liked my opinion. I have to admit I was surprised of what I saw when I opened the file in Wireshark. It looked like this:

Now this is what I call a big mess. Malformed packets, unknown ICMP, IPv4 fragmentation, source  routing, IPv4 addresses with leading zero octets, and other expert messages. So I selected one of the strange frames containing IPv6 (well, it was Silvia’s trace, so I just couldn’t look at an IPv4 packet, could I? 😉 ) and took a closer look at the decode: 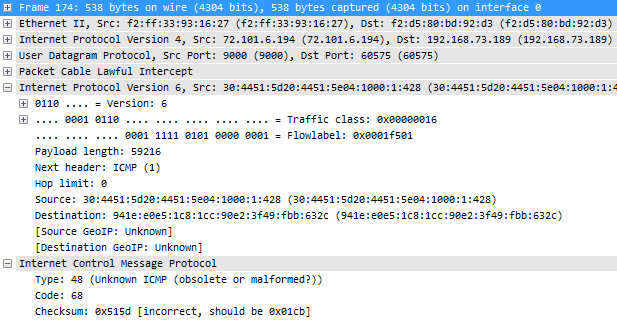 Now there’s a ton of things that are remarkable in this decode above which should be obvious to the experienced analyst. This is the list of things I noticed to be odd (don’t read the list if you want to try looking at the decode above yourself first to test your own observation skills):

Similar strange things are seen in other packets, which is hard to explain. Doing local captures is not a good idea, but usually the results aren’t this bad. So what happened?

What made me really wonder about the decode is amount of bad decodings as well as the existance of the “Packet Lawful Intercept” layer. And this was where Occam’s  razor came in: if a trace looks this bad, the easiest explanation is that it probably wasn’t captured in a good way, or isn’t displayed correctly – instead of all those weird things really happening.

The first step was that I had to check how the trace had really been captured, so I checked the summary statistics: 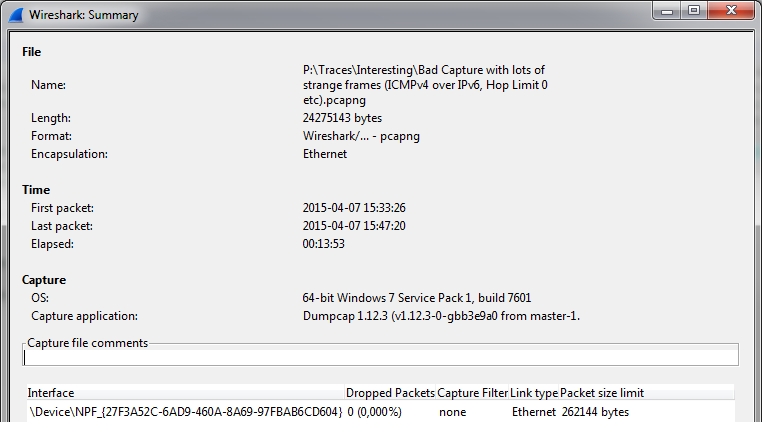 You can see the OS is a 64-bit Windows 7, and the capture application is Dumpcap 1.12.3, which is quite a recent version. All this indicates that it was really just a capture taken on a PC or a laptop, and not some special “lawful intercept” capture device. So where is this layer coming from?

So I investigated how this layer works, and with a quick search I found this Wireshark Q&A article that I had seen but forgotten about (well, as long as it turns up in an internet search I don’t have to remember about it, do I? 🙂 ) – those karma point were well earned, Graham! 🙂

So the PCLI dissector seems to be the one making things hard to read because it kicks in when there are UDP packets using port 9000. Which is why the next step is to turn it off via the “Analyze” menu: 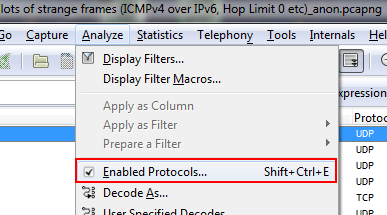 A dialog box opens and I scrolled down until I found the checkbox for PCLI, which I unchecked: 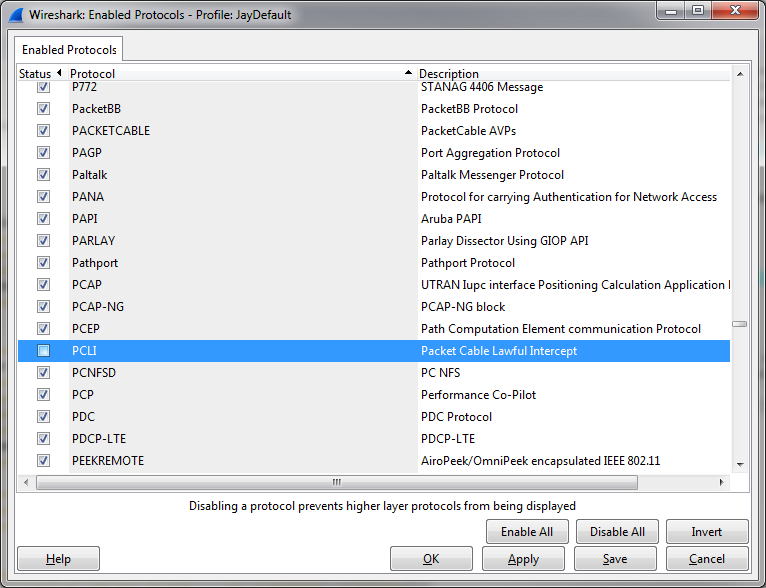 After applying the new setting the capture file looks completely different, especially since there’ no more bogus IPv6 layer showing up (all the color filters are quiet now):

You can probably leave the PCLI dissector disabled in your default profile, unless you know that you’re going to have to work with real capture files containing that protocol layer (which most of you probably don’t).

If a capture file looks really broken, with values that you have absolutely no explanation for and that should never be seen on a network, check if it’s captured and decoded correctly. I had another case like this during the 31c3 conference in Hamburg end of 2014 where my opinion was asked regarding a capture file that had packets coming and going to loopback addresses. It turned out that it had been taken locally on a Macbook, recording application behavior – but it wasn’t what ended up on the wire, so most of the network layer information was bogus.

So if in doubt, the steps are:

In case you’re wondering which kind of capture setup is the best I have a small list for you, from worst to most exact: