We don’t even need the excellent “Wireshark Display Filter” cheat sheets from packetlife.net anymore (well, Jeremy still has a lot of other, really helpful cheat sheets, so check them out).

As I said, in really old Wireshark versions, the filter box did not yet help with finding the correct filter, so it often took quite some time to get the filter expression right. My buddy Eddi used to impress people with the speed he could tell what the correct filter name was for a field in the decode, but that was just some Wireshark sleigh of hand – whenever you select a field, the status bar will show the according filter in the lower left corner. Nobody ever saw that he simply picked the correct filter syntax from there, and everyone was very impressed with his Wireshark skills, “memorizing” all these filter expressions 🙂

Here’s an example for reading the filter name for the Maximum Segment Size value:

Instead of reading the filter name from the status bar and typing it into the filter field you can also right click on the MSS field and select “Apply as filter” from the pop-up menu. I myself usually only type filters by hand if it’s faster than finding a field I can use with the pop-up menu. One of the most frequent filters I use is the TCP Conversation filter: find a packet belonging to a conversation I want to look at, and use the pop-up menu of the packet list to filter for it: 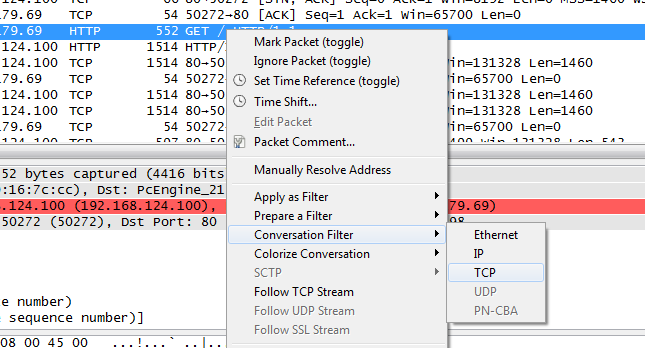 This will result in an absolute TCP filter, including both IP addresses and ports. Unfortunately, the developer version 1.99 of the coming Wireshark version 2.0 still does not have this pop-up menu option, so I’m stuck with 1.12.4 for the time being.

While Wireshark can filter on a lot of things, it can’t filter on packet dependencies, at least not without some tricks. And even with all the tricks it may still be impossible to use display filters to determine certain things about a trace. Let’s take a look at two examples and how to filter for them:

Filtering for the packets of a TCP three way handshake may sound like a simple task, but it isn’t.  The first two packets are easy, because those are the only two that have the SYN flag set. To find these, simply filter on “tcp.flags.syn==1“. But what about the third packet? It has only the ACK flag, but that’s also true for all other packets following the handshake, so we can’t just use that flag (at least not alone). Now, Wireshark beginners often try to find a filter expression that looks at packet dependencies, e.g. like “filter a packet that has a sequence number equal to the sequence of the previous SYN packet of the same connection plus one.” – and such a filter does not exist. You simply cannot filter on things in two different packets at the same time. Filters always look at a single packet at a time.

The workaround for filtering for the packet we want is to filter on values that can only be found in a packet that is the third packet of a three way handshake:

To filter on all three way handshake packets: “tcp.flags.syn==1 or (tcp.seq==1 and tcp.ack==1 and tcp.len==0 and tcp.analysis.initial_rtt)” – keep in mind that this will show the handshake packets of any conversation, so there may be more than one set. If the filter doesn’t work for you, check if you have enable absolute sequence numbers.

Trying to find unanswered pings is another interesting problem, because it’s once again something where two packets are involved – the ICMP echo request and the resulting ICMP echo response. Filtering on the relationship between those two is not directly possible as we know by now, but fortunately there is a work around available, too. The Wireshark developers added a metadata field (meaning, it shows something that is not present in the bytes of the actual packet) to the decode showing in which packet a ping was answered:

You can identify those metadata fields easily since they’re written in square brackets. Many other protocols have similar metadata fields, helping you with finding the matching request/response pairs, so if you need to filter on those, look at the packet decode to see if there are any that you can use for the protocol you’re looking at (e.g. DNS).

So we can just filter for all ICMP echo request packets where the “response in” field does not exist, and find all unanswered pings: “icmp.type==8 and not icmp.resp_in“. There is also another metadata field that explicitly states if no response was seen, so you could filter for that, too: “icmp.type==8 and icmp.resp_not_found“.

Thinking outside the box

Some problems are better solved with tools other than Wireshark. Think of duplicate packets that were captured on a SPAN port with multiple source ports – Wireshark can’t tell duplicates apart, because they’re the same, byte by byte. There’s just nothing to filter on that would tell the difference. In that case, use editcap instead, which comes as a command line tool with Wireshark.

Or you might try to compare two captures taken at different locations – it’s not really possible to filter for things like “packets that are seen on one side, but not the other”. Instead, you could export the conversation statistics to a text file or a comma separated list, and compare the two exports with a text diff tool to see where the differences are. Just make sure the sorting is the same for all files, or it will be hard to work through the lists.

One thing I often do is try to see where TCP connections have trouble during session start and session finish. There may be issues like refused connection attempts (try to find reset packets that are a response to a SYN, and not just a normal session close – again something where relative sequence numbers come in handy), repeated SYNs before a SYN-ACK shows up, and other problems. With Wireshark, there aren’t many expert messages telling you about these (not yet, at least). So for connection status diagnostics I usually use the TCP conversation statistics in TraceWrangler, which tries to identify handshake and teardown problems when gathering conversation statistics and shows them in the “Status” column to the right:

If you try to filter on something about packet relationships you need to find fields that allows you to do that by just looking at a single packet at a time. Often, others had the same problem like you do and a merciful developer added a metadata field that helps, so you can filter on that. Most request/response packet pairs contain metadata references to each other, so you can filter on those.

If you really need to do complex filtering, you could also take a look at MATE, which is an extension for the display filter engine. I was always to lazy to find out how it works 🙂