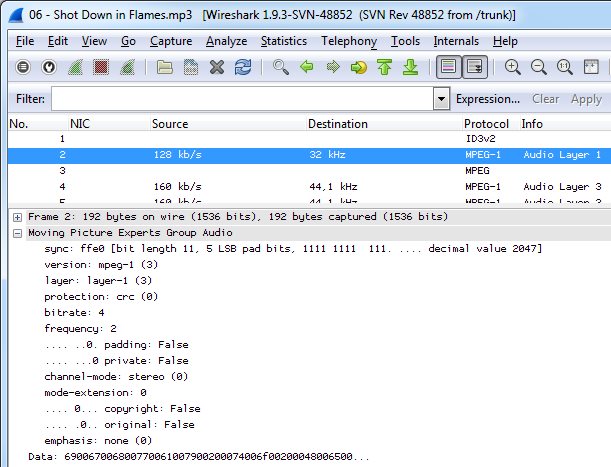 Learning something new every day…

Today, a question was posted on ask.wireshark.org, about Wireshark becoming more than just a packet analyzer since it could already read MP3, JPG and other file formats.

Of course my first thought was that the guy asking was confused about trace file formats and the ability of Wireshark to dissect and extract those kinds of media files. So I answered, saying that Wireshark reads capture files – and then it was one of these (rare, but still annoying :)) moments where Sake A.K.A SYN-bit throws in an information that I didn’t know: Wireshark does in fact open and parse those media files! If you don’t believe me, go ahead: run Wireshark (or tshark) and let it open a MP3 file (in my case “AC/DC – Shot down in Flames.mp3”, which seemed adequate in this case) – and this is what you’ll get:

I don’t know why anybody would use Wireshark to decode MP3 files, but it works. Thanks, Sake, that was my check mark for having learned something new today! 🙂